Modern Day Dreams are fresh responses to the broadcast flow. The contents are plucked and sifted primarily from broadcast TV, much of it within 24 hours of the webcast. Inforcing a rapid mix of fresh sources, rather than overdone and dry.
An excerpt or sample can provide a flavor by its content or texture by its form, a familiar tone or dischordant quirk,
combining to complement and juxtapose, to direct the main theme or to simply add a delicate nuance.
Over the course a rich and varied stock of samples and manipulated sources are built up to enrich the next mix.
Each piece is a re-assembly of some of the disparate fragments I have caught, as REM provides an abstract means to sort the stimuli of ones day.By prizing apart and frustrating the 2 complicit elements of image and sound,
by removing most of the context and leaving fragments an exploration of the auditory language of the hegemonic broadcast medium is possible.

Weaving a story of nonsense, co-incidence and narrative, rich in texture and tone, swimming in spatial delirium.

Floating
now bobbing
sinking
gentle strokes..
thrashing
deprived of the elixir
of rhyme and reason
damages the lines of communication
aphasic affliction
plunged into blind agnosia
Q. If such-and-such were the case on our surroundings, what then, what then? 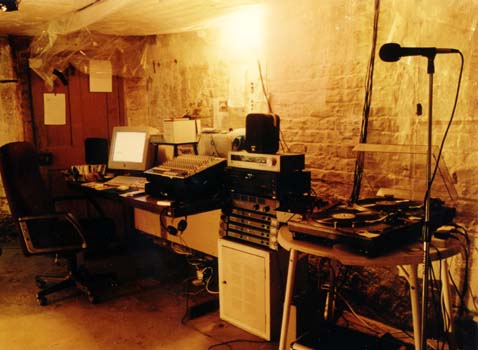 In Brief: the realaudio stored at www.gaialive.co.uk and the mp3's archived on a cover CD of mute magazine (april edition)
are a series of time & space specific audioworks. Each piece a further exploration of the language & form of the broadcast flow,
a fresh look at a 'conciouse set'....Instead of letting my REM time sort the residue still echoing around my head in bed,
I stayed up & mixed it up!


-if this dont make no sense, even after listening, and you're bothered then I'm much better at just talking, contact me via: